The need for transmission to move power to growing loads and population centers becomes more and more critical as forecasted loads in the west continue to grow and the desire to develop more renewable resources increases. 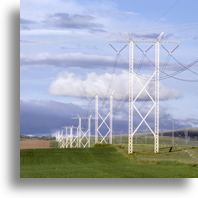 There are numerous active transmission proposals that have expressed intent to locate within Idaho’s borders. Currently, the interconnected transmission system in the West is at or near capacity and many constrained paths have been identified. The existing bottlenecks in the power grid provide serious risks that are likely to adversely impact the region, and specifically impact Idaho’s economic outlooks. New transmission infrastructure is essential to maintaining and enhancing economic opportunities that directly benefit Idaho and the region.

Delays or siting conflicts often add significant and perhaps unnecessary costs to transmission projects. As the region is preparing to embark on a period of significant transmission build out, Idaho must prepare itself for this requisite by establishing a harmonized effort with the federal, tribal, and state agencies, departments, divisions, and local governments for the purpose of insuring that Idaho’s energy needs are satisfied. 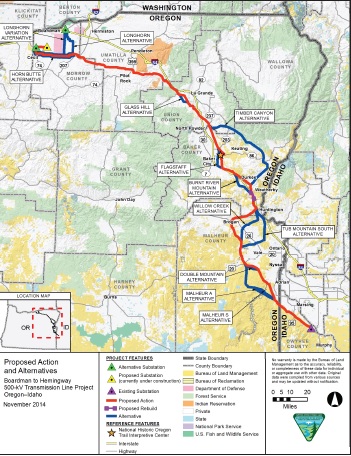 The Boardman to Hemingway transmission project (B2H) is jointly proposed by PacifiCorp, Bonneville Power Administration (BPA), and Idaho Power to design, construct, operate and maintain a new 500 kilovolt, single-circuit electric transmission line from a proposed substation near Boardman, Oregon to the Hemingway Substation near Melba, Idaho. The project would include approximately 290 miles of 500 kV lines in Idaho and Oregon. Idaho Power, which is leading federal, state and local permitting efforts, has a 21 percent share of the project. BPA has a 24 percent share, and PacifiCorp has the remaining 55 percent.

The Bureau of Land Management (BLM) and the U.S. Forest Service (USFS) filed a Revised Notice of Intent to Prepare an Environmental Impact Statement for the Proposed Boardman to Hemingway 500 Kilovolt Transmission Line Project in Idaho and Oregon and Possible Land Use Plan Amendments to the Federal Register on July 27, 2010. An original Project Order was issued by the Oregon Department of Energy (ODOE) on March 2, 2012, the First Amended Project Order was issued by ODOE on December 22, 2014 and the Second Amended Project Order was issued by ODOE on July 26, 2018. The BLM released the Final Environmental Impact Statement on November 25, 2016 and announced the availability of the Record of Decision (ROD) and Approved Land-use Plan Amendments for the B2H Project on November 17, 2017.

On September 28, 2018, ODOE received the complete Application for Site Certificate (ASC) for the proposed facility. The EFSC approved the AFC and Final Order on September 27, 2022.

Idaho Power expects construction to take three to four years. The line is planned to be in service in 2026 or later. 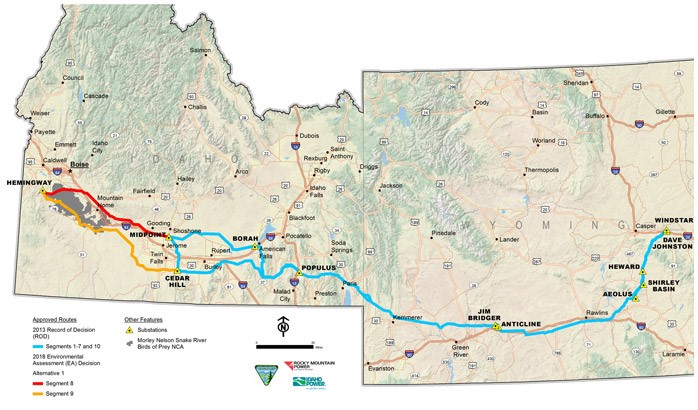 Rocky Mountain Power and Idaho Power filed applications with the Bureau of Land Management (BLM) and U.S. Forest Service (USFS) in 2007 for a right of way grant and special use permit, respectively, to construct, operate and maintain the Gateway West Transmission Line Project on federal lands. The BLM released its Record of Decision (ROD) on November 12, 2013, for segments 1 through 7 (Windstar to Populus, Populus to Midpoint and Populus to Cedar Hill) and segment 10 (Midpoint to Cedar Hill) of the project in Wyoming and eastern Idaho. It identifies the BLM authorized route on public land for these segments.

On April 17, 2017, the Interior Board of Land Appeals (IBLA) remanded the January ROD back to the BLM Idaho State Office for reconsideration of the route alternatives. The BLM completed an environmental assessment (EA) to reconsider the January 2017 decision. A notice of intent to prepare the EA was published on August 28, 2017, and began a 30-day scoping period. The BLM published a draft EA on November 3, 2017 and the final EA on January 5, 2018. The BLM issued a Decision Record on the remaining portions of segments 8 and 9 in spring 2018. For more information on the EA process, visit the BLM project website.